the end. and it was hot.

the ankles above the preppy shoes.

On September 26, 2010
it’s been going well not nursing L.
and i mean really, really well.
the first few nights we had a couple of wake-ups
but last night, he slept the best he’s ever slept.
i know, amazing, right? 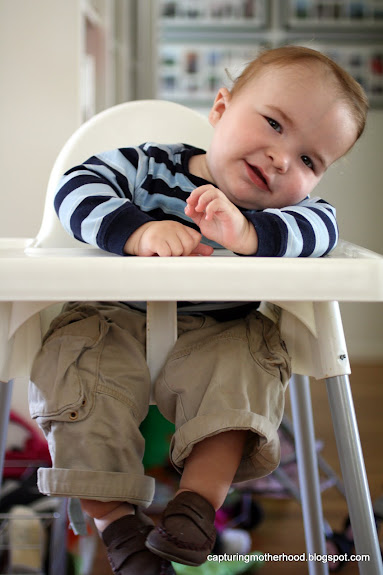 he’s been spending a lot more time in his high chair lately.
but his fluid consumption

(that i was so concerned about)
has gone through the roof.
hooray.
i know now what moms mean when they say
that their sons eat them out of house and home.
D’s always been especially picky, but L?
not so much.

and look at those chubby ankles.
when L first started to chunk up

i actually called our pediatrician
to ask her if the line in between
the ankles and the legs was normal or not.
and, i took him to a dear friend who is a nurse practitioner.
they both said:
normal.
phew.
one less thing to worry about for him.
i just want to munch on them.
the ankles that is.
and aren’t those just about the most darling and preppy shoes you have ever seen?
they’re D’s old ones and i somehow almost love them more the second time around.
since B won’t
ever
wear docksiders
ever,
i have given myself the green light to dress my sons feet
in the preppiest of shoes i can find.
success.
and today, i got to sleep in until 8:17am.
and the best part about that was that i did not
need
to sleep in (since L had such a good night)
but that i got to sleep in to actually sleep in.
just because.
B is the best.
the best, i tell you.
341. prying a new golf hat off D’s sleeping head
342. the hot, hot day
343. popcorn for dinner
344. spending some much needed time with K
345. leaving the mall with only purchasing a pretzel and lemonade