On March 8, 2010
B was on a quick business trip over the weekend.
somehow, we all survived.
i’m not even being sarcastic.
boy, was i tired when he returned. i took the 20 minute nap he offered me and slept for nearly three hours. it was monitor-free and it was lovely. 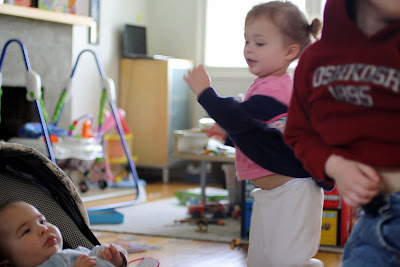 i don’t know why i had never thought of it before. it’s probably the extreme sleep deprivation i have been experiencing for well over ten months (bedrest in the hospital definitely counts. can anyone say mrs. davenport?). while i was making something in the kitchen, i asked the two big kids to entertain L in his bouncy seat. he generally enjoys (beware, i use this word lightly as he really just barely tolerates) the bouncy seat for about three-and-a-half minutes. he loved their dancing and was especially fond of D pretending he was a dog. L even had a good chuckle over that. D and K are now assigned the job of distracting him while i need to get food on the table. 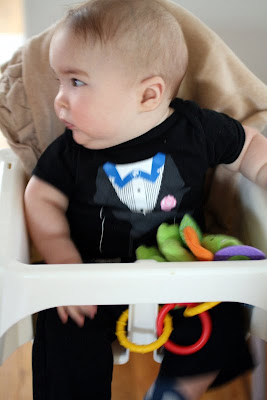 L was super excited for the Oscars and begged me to put on his fanciest onesie for the event. too bad his bedtime arrived before we started watching it.

this afternoon, D wanted to play computer games but i realized that i was in a little time crunch. i needed to bake some sweet potatoes (for L’s solids) so that the oven would be free for our insanely delicious prime rib dinner. so what’s a mom to do? i had D scrub the potatoes and i held L. much much better than me trying to clean potatoes and hold L. yeah, that wouldn’t have happened. in no time, D was playing on the computer and the potatoes were in the oven.
perfecto.

One Response to entertainers.